Many creatures have so far been encountered in the world of Scorn. The current information we have is primarily based upon concept art, the three trailers and the 2017 demo. As described by the game's website, there will be many more denizens lurking within the confines of the world. Each of these creatures will have their own personality, behaviour patterns and attitude towards the player. They will also react and adapt to some of the actions performed by the player, alongside any changes that are brought to their environment. 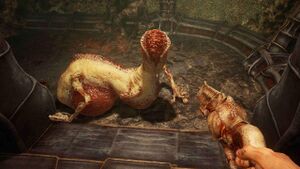 Workers, the most commonly encountered creature in the 2017 demo so far, are the four-legged, ant-like beasts that roam around the bio-engineered ruins of Scorn. Many of these creatures can be found acting inert, scaling corridors/passageways or even waiting behind the confines of closed doors. Once seen, they typically become hostile towards the player. When attacking, the creatures tend to either charge towards the player or fire an elongated, sharp projectile from the cavity in their chests. If they manage to stumble close enough to the player they will either inflict damage via a bite or grapple them before attacking with a red flagella from their chest cavity. Usually, it will only take two shots to the head from the bio-engineered pistol to take one out. However, they been known to pose a much greater threat in numbers, typically swarming the player if ever given the opportunity.

They have been shown to utilize some tactics when fighting. In certain areas, the creatures would remain inert, often among dead members of their species, and would wake up once another creature becomes aggravated at the player's presence. One Worker becomes hostile when the player shoots a separate sickly looking Worker.

The biological ruin that covers the game area is a result of the creature. Among the larger piles, Worker corpses can be found. Additionally, chains of these creatures that hang in higher areas are secured to the wall by the red fleshy webs that can be found everywhere. It's unknown why these creatures produce that material. 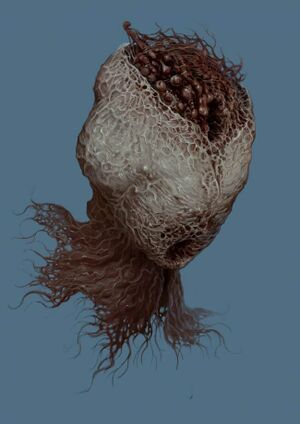 Floaters, posed as the flying counterparts to the Workers, are shown to be air-bearing, umbrella shaped creatures lurking around open areas. They have the ability to pulsate in order to propulse themselves through the air, much like some aquatic Jellyfish in real life, making them faster and harder to hit when compared to some of the other creatures. Throughout gameplay floaters have been shown to detach themselves as the head from deceased bodies of workers. They typically act passive towards the player, and only require a single shot from the pistol to be taken out.

This article is a stub. You can help Scorn Wiki by expanding it.